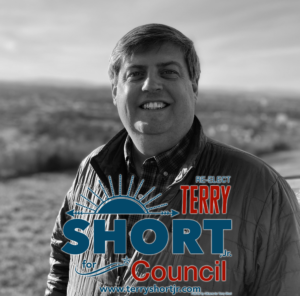 Work Experience
Terry is employed by the Virginia Department of Transportation (VDOT) where he serves as the District Planning Manager for the Staunton District. In this capacity he is responsible for the transportation project planning and prioritization process for 11 counties and 34 jurisdictions. He has been honored as the recipient of the 2014 and 2016 VDOT Commissioner’s Award of Excellence in Innovation, and nominee in the category of Environmental Stewardship in 2019. In addition, he was awarded the 2016 Governors Award for Public Service in the category of Teamwork. Prior to VDOT, Terry worked in the private consulting sector where he authored numerous award-winning community plans, capital investment strategies, and planning and design projects.

Civic and Community Experience
From the beginning Terry has embraced and immersed himself in Waynesboro civic life. He is serving, and has served the Waynesboro community in the following capacities: