Terry is helping to shape and to build the new Waynesboro economy. Our city is now leading the way in new, exciting, and innovative partnerships. New businesses are locating to the city that will help diversify economy, stregthen our labor force, and provide good paying jobs for our citizens. For example, Terry advocated for and helped lead the way for a successful GO Virginia grant which has resulted in a cyber security firm calling Waynesboro home. (https://www.newsleader.com/story/news/2019/08/21/blue-ridge-community-college-cybersecurity-graduates-employed-tiber-creek-consulting-inc/2070309001/) 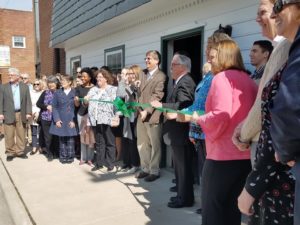 Also, our existing businesses are thriving. Terry initiated a city business visitation program  that has established and strengthened relationships with our local business community. After all, how are community leaders supposed to advocate for our area businesses if we haven’t taken the time to understand their business, their challenges and opportunities.

We are also now leaders in our area in job training and skilled trade programs. The new Waynesboro High School Career and Technical Education Center has forged new public-private partnerships, and provided opportunities for our students that couldn’t have even been imagined just four years ago. (https://www.newsvirginian.com/news/education/waynesboro-high-trades-course-successful-in-first-year/article_3d6bf88b-4f39-56c4-ae44-e33e7a3e4584.html) 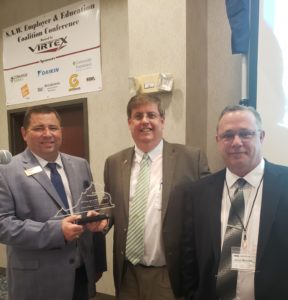 Lastly, we are honoring, celebrating and recognizing the accomplishments within our business community. Terry led the effort to establish the first “Made in Waynesboro” Business Appreciation program, which communicates our collective appreciation for the goods and services that are produced right here in Waynesboro. In March 2020 we honored our first recipient, the Virtex Company at the Staunton Augusta Waynesboro Employer and Education Coalition forum, held right here in Waynesboro. Virtex has had a record breaking year, increasing employment by over 50 employees in the last 18 months. (https://www.newsvirginian.com/news/education/working-together-coalition-between-schools-businesses-hope-to-improve-workforce/article_fa4579a6-bf08-5b6f-9392-28dfe9a27db7.html)

Terry has led the efforts to renew, partner, and strenghten the relationship that we now enjoy with the Waynesboro School Board. The results speak for themselves. The 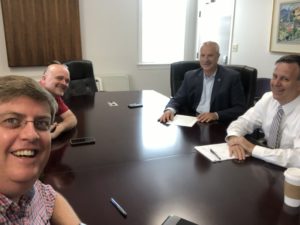 Waynesboro High School Campus Expansion Concept has, and will save Waynesboro tax payers tens of millions of dollars, while opening up opportunities to our children and families. For example, the purchase of the News Virginian building has afforded the chance to invest in a modern Career and Technical Education Center for our students. Investments that have led to the creation of the Giant Academy (located in the old Window World building),  and the 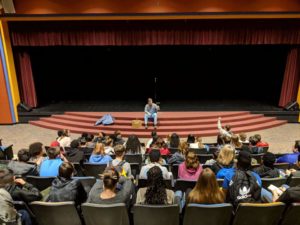 Waynesboro and Augusta Post-House House (located on Popular Avenue) are additional success stories that would not have been realized had we not decided together to reinvest in the heart of our City. These decisions have resulted in protecting and enhancing neighborhood property values, and promoting economic stability. Most importantly, for the first time in nearly a decade, all Waynesboro Public Schools are now fully accrediated.

Looking ahead to opportunities and risks, is part of who Terry is. Did you know that not one penny comes from Richmond or Washington DC to support or offset even a small 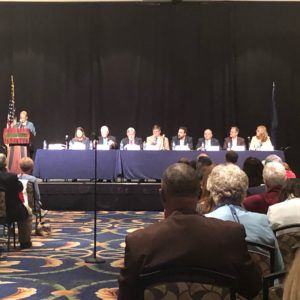 portion of the cost to renovate a K-12 public school. Not a penny. Terry continues to invest considerable time to lobby on a statewide level thru both local legislators to local government lobbying organizations to get a conversation started in Richmond.

Terry is now the Vice Chair of the Human Development and Education Committee of the Virginia Municipal League where he has successfully included a cost sharing funding bill concept as a priority agenda item for what is the largest local government organization in Virginia. In fact, Terry authored HB1431 for then-Delegate Dickie Bell which would establish a funding demonstration program that would allow local governments to match local K-12 capital construction costs to a state funding match. These are active and ongoing conversations in Richmond, and in other parts of the Commonwealth, due in part to some of Terry’s efforts representing the City of Waynesboro. (https://lis.virginia.gov/cgi-bin/legp604.exe?181+sum+HB1431)

The results speak for themselves. Turnover in our fire and police departments have dropped from as high as 28% in 2016, to as low as 3% in 2019. In the last four years we
have accomplished the following: restored long frozen patrol officer positions, replaced

squad cars, invested in operational and safety equipment, and have finally placed the order for the long overdue replacement of the $1.4M ladder truck for our fire department. The safety of our community, and the committent to those that keep us safe, will remain a top priority for Terry.

On Quality of Life

We’ve accomplished great things together, because we’ve started to believe in our

community again. Since being elected in 2016, Terry has worked tirelessly as an advocate for our community. One month in to his service, Waynesboro was poised to receive $0 of a $50M environmental damage settlement with DuPont over mercury contamination to the
South River. For more than a year, Terry led the effort to advocate for our city, and after being invited to testify on the Commonwealth of Virginia’s behalf in US District Federal Court, Terry shared in the announcement with then-Governor Terry McAuliffe that the City of Waynesboro would serve as the largest receipient of land preservation and water quality projects, totally over $4,000,000. (https://www.newsleader.com/story/news/local/2017/12/08/dupont-settlement-means-restoration-and-funds-waynesboro/933949001/)

Terry has spent his life planning, developing  and successfully executing strategies to improve the condition of communities. Competent Leadership is exactly what our City needs right now. Now, more than ever. Terry’s vast knowledge and experience working for and working with local governments will make for a stronger Waynesboro. We can do this, if we choose to “Keep Believing in Waynesboro.”

Stable & Competent Leadership: Plan the work, and work the Plan.

Terry has led the effort to fundamentaly transform the way our government communicates with its citizens. It’s hard to imagine, but with Terry’s leadership over the last fours:

CATCHING UP, KEEPING UP AND GETTING AHEAD
I believe we need to maintain the strategic vision and plan that we’ve worked so hard to develop for Waynesboro over the last four years to ensure that it remains meaningful, measurable and practical. The by-product of this effort has been a renewed committment to our Capital Improvement Plan, a plan that is now equally accountable to our future. Don’t believe the theatre that would tell you that we can acheive great things as a community by not saving, investing, and taking action. We’ve been down that road before, didn’t work then, won’t work now…especially now.

A PLACE TO CALL HOME
I still believe that we need to build a community that gets young families excited about moving to Waynesboro, buying a home, raising a family, and starting a new business. We must strive to make Waynesboro an even stronger community of choice. At the same time, we must maintain balance for the many fixed-income households across our City. In the end, improving conditions for the children and grandchildren of our most vulnerable populations will make us a stronger community in the long run. We can do this, if we choose to innovate.

BE COMPETITIVE, FAILURE IS NOT AN OPTION
I believe that we need to work towards a reasonable, responsible and affordable tax rate which allows us to be competitive with our neighbors in attracting new major businesses, without having to borrow from the bank, and increase our debt every time. We can do this, if we believe Waynesboro can balance investment with prosperity.

EXPECT THE BEST, REWARD OUR BEST
I believe that we need to maintain the efficiency of our local government, and create a structure which rewards our most inspiring, innovative and productive employees for a job well done. In the last three years, I have helped to lead our move to a merit based employee compensation program that rewards our highest performers. We can continue to improve, if Waynesboro believes in the ingenuity of our most talented public employees.

GETTING OUT IN FRONT OF EDUCATION
I still believe that we need to strengthen our early childhood education intervention programs with the goal of having the highest literacy, SAT, and eventual, the highest graduation rate in the Commonwealth of Virginia. We can do this, if Waynesboro believes investing in our youngest citizens can result in a more prosperous future for our community.

SOUND CIVIC INVESTMENTS
I believe that a primary function of government is to ensure that its citizens have the sort of institutions and resources that breed civic pride and strengthens the success for all of its citizens. In Waynesboro, the sequence of those investments in a community where decisions are long over due, hasn’t been easy, and they won’t be easy, particulary given the current global financial crisis…but they must be made. We can make these decisions, and set the course for sound civic investment, if Waynesboro believes that we must.